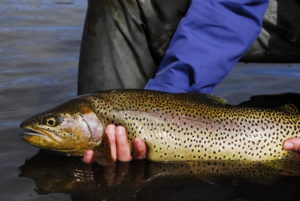 In the 1880s, rainbow trout were stocked in a number of different waters that had cutthroat trout in them. Shortly after, cutbows were prominent in these waters. Cutbows are created when the female cutthroat trout’s eggs are fertilized by a bigger male rainbow trout. Many fishermen get the cutbow confused with rainbow and cutthroat trout. The cutbow has red or orange slash markings under the jaw and a silver body. Though most cutbow have dots on their bodies, patterns vary between each fish.[3]

Cutbows spawn during spring and prefer temperatures between 40 and 50°F. They are able to reproduce in natural habitats and in hatcheries.[3] They are almost immune to whirling disease, which affects most trout in Colorado.[3]

How to Identify the Cutbow Trout

Year Round Fishing in The Mountains of Colorado

Me and my husband Frank Had a wonderful trip fishing with Big ed’s. Breckenridge fishing was the highlight of our trip. The knowledgeable guides put my 85 year old husband on numerous Rainbow Trout. Beautiful July morning! Thanks!

First Colorado fishing trip, great guide and we caught rainbow trout for everyone for our dinner tonight! Great trip!

Our guide Steven was fantastic we never fished Dillon before, it was a great experience. Caught a lot of fish including a 26″ brown trout. Extremely gracious, kind guide. Very comfortable fishing experience.